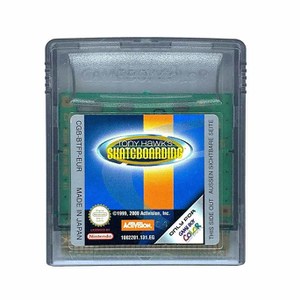 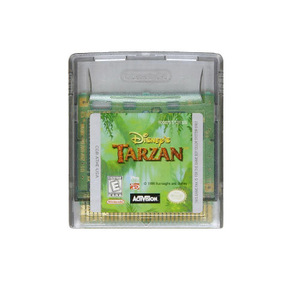 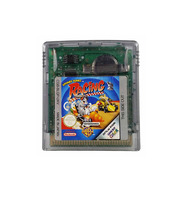 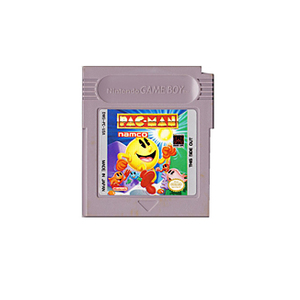 When it comes to Game Boy skateboarding titles, the selection is sorely lacking. Other than 720º and Skate or Die, no game has managed to approach the proper boarding experience. However, thanks to the popularity of the Tony Hawk series, Natsume and Activision have brought us their attempt at handheld skateboarding action with their GBC rendition of Tony Hawk Pro Skater. Though there's much to like and dislike about the title, one thing's for certain - skateboarding has never been this good on a handheld. Whether because of hardware constraints or rushed licensing, the game actually contains two unrelated activities - half pipe and tournament. In half pipe, players can take one of 14 real-world board champs through a high-flying journey of ollies, heelflips, Indy Nosebones, and various other catchphrased tricks. The half-pipe backdrops are well drawn and colorful, while the animation level is such that you never feel out of control. Furthermore, trick execution is confined to four-way directional-pad presses coupled with either the A or B button, making the game easy to grasp while letting board freaks chain together insane combos. Though the half-pipe mode doesn't deliver an experience at all like that of the console version of Tony Hawk, the ease of control coupled with rewarding gameplay nevertheless makes it a mode worthy of kudos. Better resembling the console experience is Tony Hawk Pro Skater's second game type, the tournament mode. You'll compete against three other boarders in a mad dash for the finish line. You attempt to come in first while executing tricks off such objects as fences, cars, ramps, and other course obstacles. The courses aren't as varied or unique as in console levels, but the animation level is high, and one never gets the impression that the game is sparsely drawn. Just as with the half pipe, tournament-mode controls are limited, but they let advanced gamers chain together some spectacular combos. Initially, tournament levels seem overly difficult, but a few minutes at the controls and you'll be grabbing speed bonuses, collecting VCR tapes, and somersaulting with the best of them. It would be nice if the computer couldn't just run you down, however, especially since returning the favor is near impossible. A one-on-one tournament is also available, but since the game lacks two-player capability, the one-on-one mode is merely for practice against the computer. While Tony Hawk's music and sound effects are borderline mediocre, they truly are some of the best executed on the GBC. Be it wooshing sounds for flips, thud sounds for landing, or the game's amusing crash effects, a variety of auditory nuances do an adequate job of portraying the boarding experience. Though an even greater level of variety would have been nice, what's present is quite appropriate. If anything, it's not the graphics or sound that detract from the game's overall quality, but the lack of a two-player feature. Since there are only eight combined tournament and half-pipe levels, the game's replay value is questionable at best. For some, the half-pipe mode will do a lot to counteract this complaint, but for most, the possibility of forgetting the game within a week is all too real.

The player controls Tarzan  based on the famous character created by Edgar Rice Burroughs for his novel Tarzan of the apes, in six different missions set in Africa. These include curing the Great Ape's disease and saving his friends from the evil poachersThese poachers want to capture the wildlife and place them in their zoos. Weapons that can be utilized include spears, knifes and arrow.  Pitfalls and obstacles are to be avoided in order to collect the mandatory quest item. Under a strict time limit, players can swing on vines and swim vast bodies of water to cross various parts of stages.

Looney Tunes Racing is a kart-racing game in which you can race as famous Looney Tunes characters such as Bugs Bunny,Daffy Duck and Marvin the Martian. Each character has their own typical bike such as a giant carrot, duck bill and flying saucer respectively. During the races players can collect power-ups to gain an edge on the opponents. In between races it's possible to upgrade vehicles in Sylvester's shop. Your money can also be spent unlocking new tracks, items and playable characters. There are two game modes: arcade and championship. In the championship mode you race through several progressively harder cups with each three races. All tracks are familiar Looney Tunes settings.

Pac-Man is arguably the most recognizable video game character of all time. He has made an appearance in some form or another on almost every system from the Atari 2600 to the Sony Playstation -- so it should come as no surprise that he is also available in portable form with Pac-Man for the Nintendo Game Boy. As Pac-Man, a hungry, chomping creature, your goal is to clear a maze of dots while avoiding ghosts. Power pills are eaten to make the ghosts turn blue, which is a signal that they are susceptible to your voracious appetite. he game has necessarily changed a bit from the original arcade version in order to squeeze it into the confines of the Game Boy's small, gray-scale screen. The entire maze doesn't fit on the screen and instead scrolls as you move through it. And unlike the arcade version, where each ghost was a different color and Pac-Man was yellow, here everyone is all the same shade of gray.